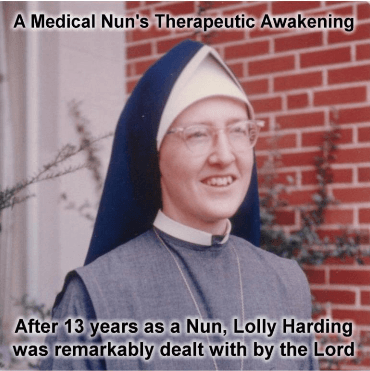 Callous treatment of a skilled drug-addicted nun-surgeon by her peer group in the Catholic Medical Missionary Order caused me, a dedicated nun, to become disillusioned. Within every person lies a marvelous adventure story of his life. Here is my story and the three torturous, separate paths I took on my journey toward peace and reconciliation with God. My first path was that of religion as a Medical Missionary Nun for thirteen years. Then I searched in vain for fulfillment as a United States Air Force nurse for six and a half years. Finally, on the third path as a married homemaker on a Texas ranch I found “the peace that passeth all understanding” when I received Jesus Christ as my Savior. I can now say with Jeremiah 31:3, “The Lord hath appeared of old unto me, saying, Yea, I have loved thee with an everlasting love: therefore with lovingkindness have I drawn thee.”

I was raised in a devout Roman Catholic family of six children in Cascade, Iowa, and entered a Medical Missionary Order at age eighteen. In my idealistic youth, my goal was to help less fortunate people. After two and a half years of strict religious training, I professed vows of poverty, chastity and obedience. After receiving a nursing degree from prestigious Georgetown University School of Nursing in Washington, DC, I was sent to the mission field in Rawalpindi, Pakistan. My experiences in the convent included working in a hospital for Muslims and a tour attending pregnant girls in a home for unwed mothers in Philadelphia. In one case Sister Barbara, a skilled surgeon, was literally worked to death by unselfishly attending Muslim women. In Pakistan no male surgeon could touch a Muslim woman to perform needed operations, therefore as the only woman surgeon at her clinic, she worked excessively long shifts to the point of exhaustion. When she began taking Demerol to keep going, her associates looked the other way. Soon she was a confirmed addict. When I met Sister Barbara, she was hopelessly addicted, left to wander about the hospital grounds and was neither given treatment nor sent away from the source of drugs, simply forgotten. After thirteen years, being psychologically unable to adjust to convent life as a nun, I requested and received a dispensation from my vows. At age thirty-two, I left the convent with a nurse’s license, a release from my vows, a new conservative suit and fare home. The main reason for leaving was great disillusionment with the hypocrisy and lack of love among the nuns. I also found it a psychologically sterile, unfulfilling life; the convent rules imposed abnormal emotionally lonely conditions. Lonely, lonely, I wanted to relate to someone and eventually get out.

Shortly thereafter, I joined the USAF Nurse Corps as a captain, originally based in California. This pathway in my life was exciting and filled with new worldly vanities. Like an uncorked bottle, I threw myself into these pursuits with the same “gusto” I had as a nun. I learned to drink, have sex, buy luxuries and taste the pleasures that the world offers.

On the surface, my assignments were interesting with a tour of duty at Travis AFB, California, then two years as a flight nurse in Yokota Air Force Base, Japan. This was during the Vietnam War. I served as an Air Evac Nurse attending wounded military men on their evacuation from Vietnam battlefields through Pacific hospital stops to home via Alaska or California. I saw the world and lived a wild life for six and a half years. During all of this I managed to sear my Catholic conscience and justify my lifestyle. I had no inner peace and the void in my soul grew even greater. Religion had offered nothing and the “lust of the flesh, the lust of the eyes and the pride of life” made for more discontent. I found myself running to confess my many transgressions to a priest with no real repentance.

During my last tour as a Major at the air base near Del Rio, Texas, I met and married a retired veterinarian-rancher. I resigned my Air Force commission and began living the third chapter of my life as a ranch housewife thirty-five miles from town. Although I was “living in sin”, I was a nominal Catholic, continuing to attend Mass, to pray to Mary, and to practice all the rituals of the Church. My husband was a divorced Protestant, so I was not supposed to receive the sacraments (whatever good that does). This supposed transgression was viewed by the Catholic Church as much worse than all the past years of party and sexual perfidy with married men, etc. After all, those sins were absolved by the priests. My soul was not at peace though I led a quiet life on a beautiful Texas ranch. I continued to feel a restlessness in my soul. My marriage was not enough to fill the longing in my spirit.

My Introduction to the Truth

After four years of married life, I attended a family reunion in Iowa. Unknown to me, my older brother had gotten saved. He spent the rest of his life witnessing to our family as well as others who were blinded to the truth by their devout Roman Catholic position. My sisters warned me about my “Bible thumping” brother before I arrived. Due to my Jesuit indoctrination, it was now my duty to straighten him out. My brother gathered the whole family around the dining table with an open King James Bible before him. I shut my mouth, put down my martini glass, and listened to him with astonishment and confusion. He told the family that there is “one Mediator between God and men, the man Christ Jesus” (1 Tim 2:5) and that we were all headed for hell.

He said that we were trusting in our Roman Catholic Church, worshiping Mary (a fake substitute for Jesus Christ), celebrating the Mass (a cannibalistic mockery of the death of Jesus Christ), and observing the Catholic sacramental life with its many anti-biblical doctrines such as Purgatory. According to Catholic teaching, Purgatory is the place you go after death to burn until God decides you have suffered enough to enter heaven. What a crock! It is not in the Bible! My brother emphasized that salvation was a free gift, the only thing necessary on man’s part is believing on Jesus Christ as Savior. “That if thou shalt confess with thy mouth the Lord Jesus and shalt believe in thine heart that God hath raised him from the dead, thou shalt be saved.” (Romans 10:9). There is no need for self-righteous works to earn your way to heaven as taught by the Catholic doctrine. This was a shocking concept and I was confused to say the least. The next day my brother again opened the Bible and showed me the fallacy of the Catholic position in almost everything I had held as infallible truth for forty-four years. Psychologically I had such a trust and attachment to Holy Mother Church, I naturally resisted the obvious truth that my brother presented. I returned home to Texas still in a state of confusion. How could the Church which I had loved and trusted completely be so totally anti-biblical and full of lies? I had never dared to question the Church’s claim to be the exclusive way (conduit) to forgiveness of sin and the key to heaven or hell. My wise brother advised me to read the Gospel of John and the Epistle of Paul to the Romans which states so clearly, “God commendeth his love toward us in that, while we were yet sinners, Christ died for us” (Romans 5:8) and “Therefore being justified by faith, we have peace with God through our Lord Jesus Christ” (Romans 5:1). He also quoted Ephesians 2:8-9, “For by grace are ye saved through faith; and that not of yourselves; it is the gift of God; not of works, lest any man should boast.”

From deep within my soul, I cried to my Savior to save me from my own self-righteousness. The “peace that passeth all understanding” flooded my being for the first time in my life. The shackles of all those years in bondage to the Catholic Church slowly crumbled and I began to know the true liberty of a child of God. I was a new creature in Christ. This new birth in Christ is the most wonderful of miracles. After studying my King James Bible for years this miracle has become clearer. The gift of salvation which is eternal life is not a process but a one-time birth into the family of God.

My dear Catholic friends, I beg you to do as I did. Come to Jesus Christ as a lost soul and trust His blood atonement at Calvary to pay for your sins. He took your place on the Cross to pay for the sins of the whole world. Receive this gift of eternal life from Him by your acceptance of His complete payment of your sins by His death, burial and resurrection. The Catholic Church has deprived you of the simple plan of salvation and has substituted a tortuous plan of works. There is no need for the pagan sacrifice you make at Mass or the futile confessing of sins to a priest. Jesus Christ awaits you, as He did me, when I was a lost Roman Catholic, to believe on Him for salvation. Once saved, the Lord does not abandon us. There is provision for learning and growth in His Word. “Rightly dividing the Word of truth” is the only protection from the many cults of our day which sound so logical and attractive. The Lord is faithful to provide all we need. 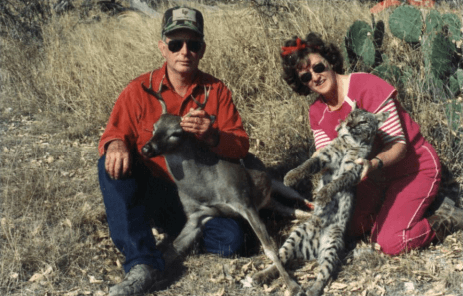