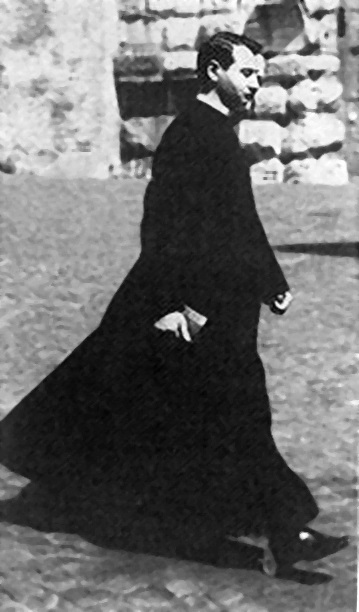 I would never have believed that I would leave the Roman Catholic Church, even less the priesthood. If someone had predicted it, I would have thought it impossible.

I entered the Salesian Order at the age of fifteen, and in due time, I was ordained to the priesthood. I worked mainly with young people and enjoyed this work very much. Then, after nearly ten years as a priest, my Father Superior imposed a punishment on me, sending me to Rome for one month to perform spiritual exercises.

The reason was that I had revealed to him that I had experienced affection for a young woman. I had broken off the relationship partly because I was not sure that I was truly in love with her, but also because I had consecrated my life to God and was not prepared to retract my commitment.

There was, of course, much pride and selfishness in my decision. It would have been somewhat humiliating for me to have to confess that I had been “unfaithful” to my priestly calling.

Life Under the Law of the Church

I had asked my Superior for transfer to another monastery, but instead of receiving a fatherly talk, I was duly served with the letter informing me of my punishment. I knew that for the rest of my life this blot would stand against me, and I would always be viewed with suspicion.

During my month in Rome desperate and bitter thoughts surfaced in my mind. Sometimes I wanted to escape, it did not matter where. Other times I yearned for my work in Naples. I passed through moments of very deep depression. I called upon the Lord in prayer, but everything in and around me remained silent. I felt completely alone, as if in a prison, constantly aggrieved and assured of my innocence.

The monastery was situated on Mount Selie, near old Rome, and commanded a view over the whole of Rome and the Colosseum. From it I could watch ordinary life as it flowed beneath me. I saw how people enjoyed one another’s company and loved each other, and I asked myself whether they really offended God in so doing. I wanted to mix with these people. I longed to discard my black robes, my cassock – which made me feel like an unreal person -and I badly wanted to be a genuine person like everyone else.

I confided in an old Father and explained my feelings to him. He suggested that I write to my Superior, asking him to give me permission to return to my former work. My Superior answered that I must bear all these unpleasant experiences as penance for my sin and unfaithfulness. However, he did give me permission to go out in the day. So, I went out. I did not travel about Rome as a pilgrim as he clearly intended, but as a tourist. I bought gaudy newspapers and magazines, yet I was not satisfied. I used the opportunity to ask advice of many other priests. Their reasoning always ended at the same point: I should never have put my problem before my Superior but should have kept quiet. My Superior had acted in accordance with church law, even though he had interpreted it in the strictest manner. I returned to Naples, not to continue my work there, but rather to go back to my parents.

I had been taught to believe in the Catholic Church on the grounds that I could only find Christ through the Church. Obedience to Christ, according to Catholic teaching, meant subjection to Christ’s substitute on earth, namely the pope. However, as I read through the Gospels in my “punishment-cell,” I saw that this teaching was contrary to the Gospels.

In Rome I frequently consulted the telephone directory for the address of a Protestant church, although at that point Protestantism did not exactly fill me with confidence. The only reason I was inclined to contact Protestants was for help in leaving my church and beginning a new life. I never thought they could help me in my struggles of faith.

During my stay with my family in Naples the thought about contacting Protestants came back to me, and I began to wonder whether they might be right after all. During this time I was allowed to fulfill all my priestly functions, but during a period of seven months I only read Mass twenty times, heard confession on even fewer occasions, and never wanted to preach.

One Sunday, I avoided Mass and went for a walk. During that walk I noticed a building displaying literature about the Bible. It was the entrance of an “Evangelical” church. I did not venture in as I thought I might cause a commotion by going in dressed in my Roman Catholic clerical garments, so I phoned the minister and visited him privately to explain my case.

He put me in touch with several ex-Catholic priests who helped me very much, but I was not yet willing to leave my church. I was afraid of making a decision that might be influenced by my recent punishment. I therefore resumed my duties as a priest and spiritual leader among young people, and though I threw myself into all manner of religious work with great energy, I found that I developed an increasing repugnance for it.

I no longer believed in the Mass, nor in the priestly hearing of confession. I had several conversations with my new Superior, who was very alarmed at how near I had drifted to Protestantism. He advised me to pray very much to Mary, saying that she would help me find my faith again.

“Ye Must Be Born Again”

My departure from the priesthood was now inevitable, and within a short time I left Naples and made my way to the well-known “refuge” for ex-priests in Velp, Holland. In this home, because of reading the Bible and praying to God for forgiveness and help, I came to find Christ in a personal way. I underwent that experience of conversion that Christ declares as necessary: “…Ye must be born again” (John 3:7). “And as Moses lifted up the serpent in the wilderness, even so must the Son of man be lifted up: That whosoever believeth in him should not perish, but have eternal life. For God so loved the world, that he gave his only begotten Son, that whosoever believeth in him should not perish, but have everlasting life” (John 3:14-16).

Every birth involves effort and pain. Twenty years of monastic life, coupled with my Catholic theological training and my obstinate character, provided great hindrances to my seeking and finding God. Finally, however, I yielded to the Lord in childlike surrender and said simply, “Lord, I believe.”

Since then the Lord has never left me alone. He has strengthened my faith through both joy and sorrow and has truly made Himself known to me as a living and personal Friend and Savior.