From the Monastery to the Ministry – José Borras 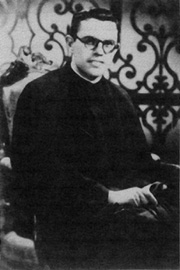 Father, you must start a campaign against the Protestants. They are growing more and more,” said Sister Dolores, a nun in a cloister where I went on Sundays to say Mass and preach.

I was a young priest and teacher in a school of Spain when the nun asked me Sunday after Sunday to do something against the Protestants.

“They are deceiving the simple people, and with material gifts they are winning many good persons for their heretical group,” the nun said.

Willing to defend the Gospel of Christ, I decided to fight against the Protestants. The only thing I knew about them was that they were bad and their doctrine was full of errors and heresies.

A few days later a pupil came to my class with a thick book in his hands. “Father,” he said to me, “This is a Protestant Bible. A woman gave it to my mother, but she is afraid of keeping it because she thinks it would be a sin to do so. Would you like to burn it?”

“Oh, yes, I will destroy it,” was my answer. “We must finish with all the Protestant propaganda.”

After I had torn out some of the first pages, I changed my mind, thinking that since I needed to preach against the Protestants and did not know their errors, I could read their Bible to find out their main heresies.

I read some portions of the New Testament and compared the text with my Catholic Bible. When I discovered both Bibles were almost the same, I became very confused and wondered how in the world there could be such great differences between Catholics and Protestants since they both apparently had the same Bible. My conclusion was that the Protestants did not read their Bible or if they did, surely they did not practice its teachings.

A Family and a Pastor

Thinking that the best way of knowing who the Protestants were would be to observe their lives and customs, I went to visit a Protestant family. I told them that I was a teacher and would like to know their doctrine to teach my pupils better what Protestantism was.

I was surprised that they were polite with me. I was astonished to see that they knew the Bible better than I. I was ashamed when I heard them speaking to me about Christ with a conviction that I, priest that I was, never felt.

They explained to me some questions and invited me to speak with their Baptist pastor. I met him the next day, but my first words were: “Do not try to convince me, because you will waste your time. I believe that the Catholic Church is the only true one. I would only like to know why you are not a Catholic.”

He invited me to meet every week and to study the New Testament, discussing in a friendly way our different points of view. We did so.

The pastor answered all my questions with texts from the New Testament. My arguments were always the sayings of the popes and the definitions of the Councils. Although I did not accept his arguments externally, in my own mind I realized that the words of the Gospels had more value than the decisions of the Councils, and that what Peter and Paul said was of more authority than the teaching of the popes.

As a result of our conversations, I began reading the New Testament assiduously in order to find some arguments against the Protestant doctrine. I wanted not only to show that the pastor was mistaken, but also to win him to the Catholic Church. But after each one of our interviews, I came back to my school feeling that he had defeated me in argument.

For a long time I was very concerned, reading the New Testament and praying to God asking that He might increase my faith and dispel my doubts so that I should not make a mistake. But the more I read and prayed, the more confused I became. Could it be possible that the Catholic Church might not be the Church of Christ? Could I be wrong in my faith? If so, what had I to do?

I heard that other priests and monks became Protestants by studying the Bible, but I could not imagine myself doing the same. Be a Protestant? Be a heretic? Be an apostate to my faith? Never! What would my parents, my pupils, and my friends say? My eleven years of study would be declared invalid. What would I do for a living?

These thoughts disturbed me greatly. I preferred not to change my faith. I wished I had never spoken with that pastor. I tried to convince myself that he was mistaken. I read the New Testament more and more, seeking for an answer to confirm my position as a Catholic priest. As I read more, I saw more clearly my wrong situation, but I was so afraid of leaving the Catholic Church that I decided to continue as a priest even though I could no longer believe in Catholic doctrine.

Light in the Darkness

One Sunday, Sister Dolores talked to me: “Father, you didn’t preach against the Protestants as you promised me to do. They continue growing every day and are winning many people for their church.”

“Sister,” I said to her, “I have been studying the Protestant doctrine during all this time, but I have discovered that they are not as bad as we think. They base their doctrine on the Bible and we cannot preach against the Word of God.”

“You are quite mistaken, Father,” answered the nun. “They are very bad. They are wolves in sheep’s clothing. They are enemies of our country. They hate Mary. They are undermining our faith in the Pope. We must start a campaign against them.”

I told her how some priests that wanted to preach against the Protestants had been converted and became Protestants when they studied their doctrine without prejudices and in the light of the scriptures.

The nun interrupted me. “Don’t tell me this, Father; they were not converted, but perverted. They went over to Protestantism either because they were demented or because they wanted to get married. You can study this doctrine without fear,” she continued, “and I am sure you will never go to Protestantism, because you are not demented; neither would you sell Christ for a woman.”

“I am thinking the same, Sister,” I replied. “I promise you to study this question seriously. If I come to the conviction that the Protestants are wrong, I will make a campaign against them. If I discover that they are right, I shall become one of them.”

“Don’t worry, Father,” said the nun, smiling, quite satisfied with my decision. “You will never be a Protestant.”

I read my New Testament again and again, and I prayed to God with all my heart, asking for wisdom and guidance in order to arrive at a clear and right decision. I knew I would never be happy otherwise. 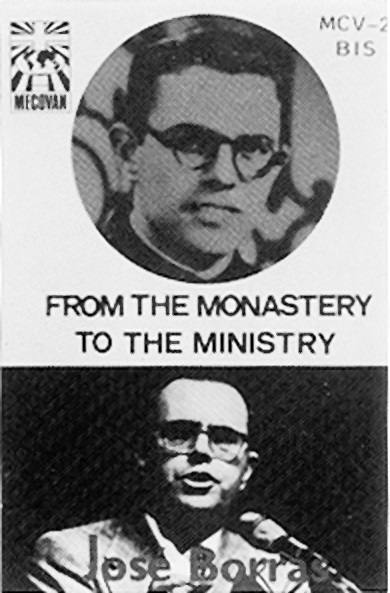 Three months later, I left the Catholic Church because I could not go on doing things and pretending to believe doctrines that deep in my heart I knew were wrong. I thought of all the possible difficulties, but I decided to follow Jesus Christ in spite of them.

The most important thing that could have happened to me was my personal encounter with Jesus Christ, and when I came to know Him as a personal Savior.

It is not enough to be a good Catholic: the important and necessary thing is to be born again in Christ. This has been my experience. When I entered into Christ, I experienced that He not only liberated me from my sins, but also from the heavy load I had to carry being in a Monastic order. “Blessed be the God and Father of our Lord Jesus Christ, who hath blessed us with all spiritual blessings in heavenly places in Christ. In whom we have redemption through his blood, the forgiveness of sins, according to the ‘riches of his grace’” (Ephesians 1:3 & 7).

Thank God for the many who have sought and found that rest. The same God who transformed the life of Saul the persecutor on the way to Damascus, and transformed the life of Father Borras in the cell of a monastery, is able to transform your life wherever you are. “I will greatly rejoice in the Lord, my soul shall be joyful in my God; for he hath clothed me with the garments of salvation, he hath covered me with the robe of righteousness (Isaiah 61:10).