I Could Not Serve Two Masters

I was born in Venice, north Italy, on March 22, 1917. At the age of ten, I was sent to a Roman Catholic seminary in Piacenza, and ordained a priest after twelve years of study, on October 22, 1939.

Two months later, Cardinal R. Rossi, my superior, sent me to America as assistant pastor of the new Italian Church of “Blessed Mother Cabrini” in Chicago. For four years I preached in Chicago, and later in New York. I never questioned if my sermons or instructions were against the Bible. My only worry and ambition was to please the pope.

Believe on the Lord

It was on a Sunday, February 1944, when I turned on the radio and accidentally tuned in on a Protestant church program. The pastor was giving his message. I was going to change the program because I was not allowed to listen to Protestant sermons; but other than being interested, I do not know why I kept listening.

My old theology was shaken by one text from the Bible I heard over the radio: “Believe on the Lord Jesus Christ, and thou shalt be saved.” Therefore, it was not a sin against the Holy Spirit to believe that one was saved.

The Lord Rebukes Me

I was not yet converted, but my mind was full of doubts about the Roman religion. I was beginning to worry about the teachings of the Bible more than about dogmas and decrees of my pope. Every day poor people were giving me from five to thirty dollars for twenty minutes of ceremony called Mass, because I promised them to free the souls of their relatives from the fires of purgatory. But every time I looked at the big crucifix upon the altar, it seemed to me that Christ was rebuking me, saying: “You are stealing money from poor, hardworking people by false promises. You teach doctrines against My teaching. Souls of believers do not go to a place of torment, because I have said, ‘Blessed are the dead which die in the Lord from henceforth: Yea, saith the Spirit, that they may rest from their labours; and their works do follow them’ (Revelation 14:13). I do not need a repetition of the sacrifices of the cross, because My sacrifice was complete. My work of salvation was perfect, and God has sanctioned it by raising Me from the dead. ‘For by one offering he hath perfected for ever them that are sanctified’ (Hebrews 10:14). If you priests and the pope have the power of liberating souls from purgatory with Masses and Indulgences, why do you wait for an offering? If you see a dog burning in the fire, you do not wait for the owner to give you five dollars to take the dog away from it.”

I could no longer face the Christ on the altar. When I was preaching that the pope is the vicar of Christ, the successor of Peter, the infallible rock upon which Christ’s church was built, a voice seemed to rebuke me again saying, “You saw the pope in Rome: his large, rich palace, his guards, men kissing his foot. Do you really believe that he represents Me? I came to serve the people; I washed men’s feet: I had nowhere to lay My head. Look at Me on the cross. Do you really believe that God has built His Church upon a man, when the Bible clearly says that Christ’s Vicar on earth is the Holy Ghost, and not a man, (John 14:26) ‘And that rock was Christ.’ If the Roman Catholic Church is built upon a man, then it is not My Church.”

I was still preaching that the Bible is not a sufficient rule of faith but that we need the tradition and dogmas of the Church to understand the Scriptures. But again, a voice within me was saying, “You preach against the Bible’s teaching; you preach nonsense. If Christians need a pope to understand the Scriptures, what do they need to understand the pope? I have condemned tradition because everyone can understand what is necessary to know for personal salvation. ‘But these are written, that ye might believe that Jesus is the Christ, the Son of God; and that believing ye might have life through his name’ (John 20:31).

Whose Blood Was Shed?

I was teaching my people to go to Mary, to the saints, instead of going directly to Christ.

However, a voice within me was asking, “Who has saved you upon the cross? Who paid your debts by shedding His blood? Was it Mary, the saints, or I, Jesus? You and many other priests do not believe in scapulars, novenas, rosaries, statues, candles, but you continue to keep them in your churches because you say simple people need simple things to remind them of God. You keep them in your churches because they are a good source of income. But I do not want any merchandising in My church. My believers should adore Me—Spirit and Truth. Destroy these idols; teach your people to pray, to come to Me only.”

Where my doubts were really tormenting me was inside the confessional box. People were coming to me, kneeling before me, confessing their sins to me. And I, with a sign of the cross, was promising that I had the power to forgive their sins. I, a sinner, a man, was taking God’s place, God’s right, and that terrible voice was penetrating me, saying, “You are depriving God of His glory. If sinners want to obtain forgiveness of their sins they must go to God and not to you. It is God’s law they have broken. To God, therefore, they must make confession; to God alone they must pray for forgiveness. No man can forgive sins, but Jesus can, and does forgive sins.” “And she shall bring forth a son, and thou shalt call his name JESUS: for he shall save his people from their sins” (Matthew 1:21). “Neither is there salvation in any other: for there is none other name under heaven given among men, whereby we must be saved” (Acts 4:12). (emphasis added) “My little children, these things write I unto you, that ye sin not. And if any man sin, we have an advocate with the Father, Jesus Christ the righteous” (I John 2:1).

He does not say that we have the confessional box, or the tribunal of confession in which, having confessed our sins to the priest, we may receive absolution. “He that believeth on the Son hath everlasting life: and he that believeth not the Son shall not see life; but the wrath of God abideth on him” (John 3:36). “If we confess our sins, he is faithful and just to forgive us our sins, and to cleanse us from all unrighteousness” (I John 1:9). “Therefore we conclude that a man is justified by faith without the deeds of the law” (Romans 3:28). “Therefore being justified by faith, we have peace with God through our Lord Jesus Christ” (Romans 5:1). “For by grace are ye saved through faith; and that not of yourselves: it is the gift of God” (Ephesians 2:8). “And they said, Believe on the Lord Jesus Christ, and thou shalt be saved, and thy house” (Acts 16:31). “But to him that worketh not, but believeth on him that justifieth the ungodly, his faith is counted for righteousness. Even as David also describeth the blessedness of the man, unto whom God imputeth righteousness without works” (Romans 4:5-6). “And if by grace, then is it no more of works: otherwise grace is no more grace. But if it be of works, then is it no more grace: otherwise work is no more work” (Romans 11:6). (See also Galatians 3:11; II Timothy 1:9; Titus 3:5; Luke 17:10; I Corinthians 15:10; II Corinthians 3:5; John 3:16; Acts 13:39; Galatians 2:16; Philippians 3:9).

Good works are not in any way the medium or cause of salvation but are the result, the fruit, or evidence thereof (Matthew 7:20). The aim of the Roman Church in requiring works and the sacraments ministered by priests to obtain the grace of God is to keep the people subject to the priest and the pope in order to retain the Church’s power over the nations.

One Master: The Lord 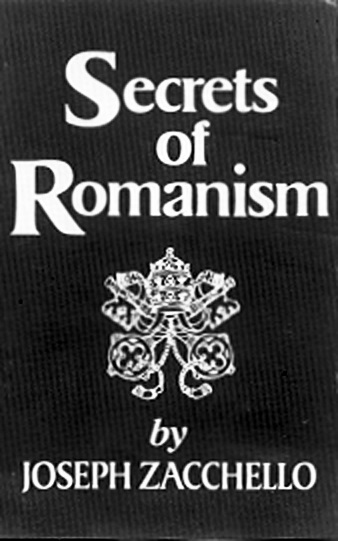 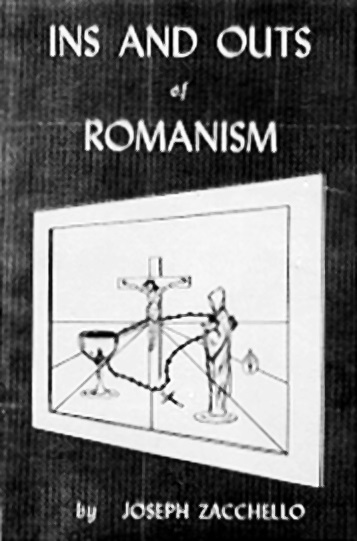 I could not stay any longer in the Roman Catholic Church, because I could not continue to serve two masters: the pope and Christ. I could not believe two contradictory teachings: tradition and the Bible. I had to choose between Christ and the pope, between the Bible and tradition; and by God’s grace I have chosen Christ and the Bible. I left the Roman priesthood and the Roman religion in 1944, and now I have been led by the Holy Spirit to evangelize Roman Catholics and urge Christians to witness to them without fear.