I Found Christ the Only Mediator – John Zanon 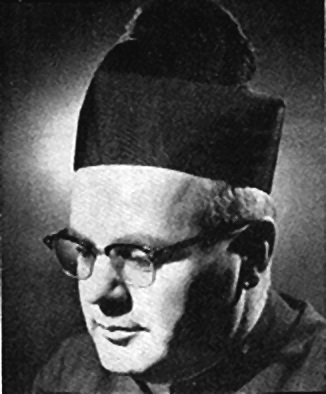 I was born in 1910 to poor but devout Roman Catholic parents living in northern Italy. Following my ordination by Cardinal Rossi, June 29, 1935, I was sent to the United States.

A few years after I came to this country, I received a table radio as a birthday gift. To my surprise and joy, I found a few Protestant programs and, I loved their messages and songs from the very beginning. The thing that impressed me the most was that they put a great emphasis on the Bible. It seemed to me these preachers were really fulfilling Christ’s mandate: “…to preach the Gospel…for it is the power of God unto salvation to everyone who believeth…” (Romans 1:15-16). In an attempt to prove how right I was in being with the Roman Catholic Church and how wrong those were who were outside of it, I began to read the Bible earnestly and prayerfully. The more I read and the harder I prayed to God, the more clearly I understood how wrong the Church of Rome was.

In the Gospel of John I read “But as many as received him, to them gave he power to become the sons of God” (John 1:12); “For God so loved the world, that he gave his only begotten Son, that whosoever believeth in him should not perish, but have everlasting life” (John 3:16). The Bible could not be clearer in this all-important matter of our salvation.

Teachings Not in the Bible

Even being a Roman Catholic priest did not assure the salvation of my soul. I came to realize that my zeal and good works as a priest could not save me, because I read in the Bible: “For by grace are ye saved through faith; and that not of yourselves: it is the gift of God: Not of works, lest any man should boast” (Ephesians 2:8-9).

This shook my faith in Roman Catholic teachings. Up until now I had blindly accepted all of Rome’s teachings. A Catholic has no choice: either he accepts Rome’s doctrines without question, or he is excommunicated. Because I was beginning to doubt everything, I started searching the Scriptures more diligently than ever. I discovered that the sacrifice of Jesus Christ on the cross was all- sufficient, “By the which will we are sanctified through the offering of the body of Jesus Christ once for all” (Hebrews 10:10); “For by one offering he hath perfected for ever them that are sanctified” (Hebrews 10:14); “Who needeth not daily, as those high priests, to offer up sacrifice, first for his own sins, and then for the people’s: for this he did once, when he offered up himself” (Hebrews 7:27). There is no need then of Mass, confession, or Purgatory.

Go to Jesus Not to Rome

I began to realize all these doctrines of the so-called only true Church were nothing but Roman inventions. Pursuing my studies of the Roman Bible further, I learned the devotions to Mary, the mother of our Savior, and the saints were not even mentioned in the Bible. Mary herself directed the attendants at the marriage feast of Cana to go to Jesus, and: “His mother saith unto the servants, whatsoever he saith unto you, do it” (John 2:5). Christ invites us to come directly to Him and not to appeal through the saints as the Roman Church teaches: “Come unto me, all ye that labour and are heavy laden, and I will give you rest” (Matthew 11:28); “Jesus saith unto him, I am the way, the truth, and the life: no man cometh unto the Father, but by me” (John 14:6); “If ye shall ask any thing in my name, I will do it” (John 14:14). And Paul, divinely inspired, wrote: “For there is one God, and one mediator between God and men, the man Christ Jesus” (I Timothy 2:5).

Once again I had to conclude from my Bible study that the thousand and one devotions to the saints were all inventions of Rome. For the first time in my life it became crystal clear that the teachings of the Roman Catholic Church were wrong. I thanked the Lord for enlightening my mind. I had no choice but to leave the Roman Catholic Church. I began formulating my plans, but the decision frightened me. I knew my parents and brothers would be hurt and the Catholics would feel I had disgraced them. It would also cost me many life-long friends, security, prestige, and a comfortable life. I delayed and prayed. The voice of the Lord came clear and firm, “He that loveth father or mother more than me is not worthy of me: and he that loveth son or daughter more than me is not worthy of me” (Matthew 10:37).

To still this divine warning I put aside my Bible and began to work harder than ever. I recalled the vows made in seminary and particularly on the day of my ordination: to be one of the best priests. This gave me a relative peace of mind for quite a few years.

The Sword of the Word of God

In January 1955, I had a pleasant surprise. Rev. Joseph Zacchello, the editor of the “Convert Magazine,” came to visit me while he was in Kansas City, Missouri. I was startled when he asked me if I was saved. This question haunted me and I prayed to God again to show me the way of salvation. The voice of the Lord came clearly and reproachfully to me: “Think not that I am come to send peace on earth: I came not to send peace, but a sword” (Matthew 10:34). That sword I used to cut myself off from everybody near and dear to me.

Today, after taking Our Lord for my personal Savior, I am experiencing how right He was when He said: “…Verily I say unto you, There is no man that hath left house, or parents, or brethren, or wife, or children, for the kingdom of God’s sake, Who shall not receive manifold more in this present time, and in the world to come life everlasting” (Luke 18:29-30).