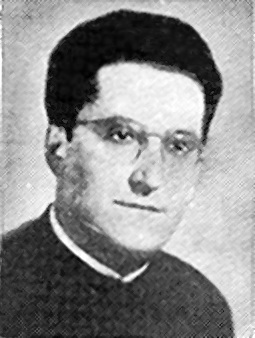 I was born in Viscaia, Spain, on the 9th of April 1925. At age eleven I lost my father, a victim of the Spanish Civil War (1936-1939). Some uncles, sincere, yet deceived, set me on the road to studying for the priesthood. I was ordained a priest on the 24th of September 1949. Although for eight years I had been working in Spain instructing youth, I myself needed peace. In spite of all the vows of poverty, chastity, obedience, interminable prayers and confessions, I did not manage to resolve the anguish of my soul.

I observed, with qualms of conscience, countless rules and laws; I received sacraments and practiced ceremonies, all without knowing Christ as my Savior, or even wishing to read the Word of God. Besides, I could not teach what I was ignoring. Of course, it had never occurred to me to think that I was practicing a ministry contrary to the Holy Scriptures.

God in His Mercy Guides Me

Meanwhile, I was designated for the parish of “Our Lady of the Remedies” in Rocha, Uruguay, in the capacity of Father Curate. I faithfully carried out my mission, yet did not find the remedy for my troubles.

Never had I spoken with Evangelical Christians (or “Protestants” as they are usually called), nor desired to become one. However, God in His mercy was guiding me. In September of 1958, I met two Evangelical ladies coming from Buenos Aires, whose conversation left a pleasant impression in my soul. They prayed to God with confidence and had complete knowledge of His Word. They asked me if I was saved. I replied that I was expecting to be saved by the merits of Christ and my good works. They replied that “justified through faith, we have peace with God,” and that “…the blood of Jesus Christ his Son cleanseth us from all sin” (I John 1:7).

All that they said is cited in the Scriptures (Ephesians 2:8, Romans 5:1, I John 1:7). I responded, “This is understood by the Church in the Mass, in which daily sacrifices are offered for our sins and for the dead.” The ladies replied, “The Roman Church and you priests would say many things; however, the Bible assures us: “Now where remission of these is, there is no more offering for sin” (Hebrews 10:18).

Reading and Preaching the Word of God

Immediately, I wrote to friends living in Spain and asked them to send me two translations of the Bible, the Catholic one of Nacar-Colunga and the Evangelical one of Reina-Valera. As soon as they arrived, I began to read them avidly at the rate of seven or eight hours a day. I made sure that the books were the same; they only differed in some words used by the translators. The Word of God was revolutionizing my spirit. After three months in the true “school of God,” I traveled to Buenos Aires desiring to know the Evangelicals personally. Three days, in which I attended the services and conversed with them, was enough to convince me that people who enjoyed so much peace and happiness, who prayed to God asking always in the name of the Lord Jesus, could not be wrong. It was impossible.

On returning to Rocha, I could not stop preaching the Bible to the faithful of my parish. Included in the Mass of those days were references to the Parable of the Sower, to the healing of the blind man of Jericho, the temptation of the Lord in the desert, etcetera. The occasion was favorable to exhorting the parish to read the Holy Scriptures. I did not attack any Roman Catholic dogma, and in my spirit I held firm the resolution of not attacking the Roman Catholic Church. At that time, I believed that I was far from being saved. Besides, personal interests bound me.

Nevertheless, my surprise was great when on the anniversary of my arrival at Rocha (February 21, 1959), the senior Bishop told me that in view of the accusations that I had preached “as a Protestant,” I was expelled from the Diocese and had to go back to Spain.

If I had preached against Christian doctrine, I would have willingly recanted publicly. But according to the Church’s own legislation, notification must be sent to the accused party before they could impose ecclesiastic censure. I was restricted in my duties. Although my conscience did not accuse me before God, I headed for Nuncio, asking for a new interview with the Bishop. He was a little more amiable, but I decided that I must leave Rocha; and after eight days of spiritual retreat, I took the office of priest in Rio Branco.

No Other Foundation than Christ

Those days of retreat served to help me know the Bible better. The more I read, the more I was convinced that the Roman Church was completely removed from the spirit of the Gospel. In the book, Why I Embraced The Priesthood And Why I Left It, I explain amply the reasons that induced me to leave the Roman Church. There, everything is put in its place: Christ, the fundamental rock of His Church—not Peter; the Scriptures—not the traditions; the Virgin Mary as mother of the Savior—not as Mother of God; the holy men of God, privileged—but not intercessors; and etcetera. I noted that in the same Catholic Bible already cited, in the second commandment, which Rome cut out of the catechism, it was not only prohibited by God to worship images but to make them. “Thou shalt not make unto thee any graven image, nor any likeness of any thing… thou shalt not bow down thyself to them…” (Exodus 20:4-5).

The Catholic Church teaches that (1) the priest, called Father, is placed by God to instruct; (2) that you must confess sins to him for them to be absolved; (3) that only through him and through the Church can one obtain salvation.

Consequently, not being able to continue struggling against God, against His Word, and against my own conscience, I decided to yield myself into His hands and release myself from the Church of Rome. The Word of Christ was fulfilled more than once “And ye shall know the truth, and the truth shall make you free” (John 8:32). I did nothing more than to obey one of the most solemn warnings that concludes the Bible: “Come out of her, my people, that ye be not partakers of her sins and that ye receive not of her plagues” (Revelation 18:4).

Now, like the apostle Paul, I preach the Gospel, “Having therefore obtained help of God, I continue unto this day, witnessing both to small and great, …show light unto the people, and to the Gentiles” (Acts 26:22-23).