The Word of God Came to My Rescue – Joseph Lulich 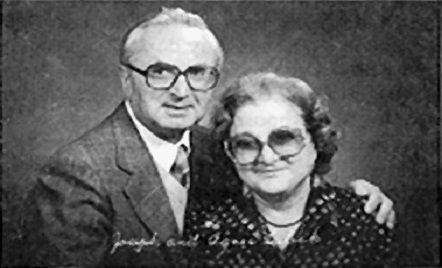 My name is Joseph Lulich. I am glad to be able to share with you what the grace of God has done in my life. I speak to you as an older man who has lived most of his life as an ex-Roman Catholic priest, one who once served faithfully and sincerely the Roman church for fourteen years, and who then served as a missionary used by God to spread His glorious Gospel in one part of our needy world.

I was born on the eastern border of Northern Italy, where I lived during my childhood. I grew up knowing the horrors of the First World War, and fear of the future gripped me. At the age of twelve, my father took me to a monastery for my education. I well remember my farewell to my family. I was so young, but in my heart I had a strong desire to find peace in my soul, to become a priest and thus be able to help others in their physical and spiritual needs. Fifteen years passed by.

A Priest But Disappointed

I had spent all my time in study, prayer, and good works, in order to become a priest. Nevertheless, when the time came for me to say my first Mass in my native town, I felt bitterly disappointed. The peace I had dreamed of was not yet in my soul. I was technically well prepared: philosophy, theology, medical training, languages, ability to endure physical and spiritual hardships, these were my equipment.

I was ordained a priest, and I was ready to serve the Catholic Church for the rest of my life. I had experienced the agony that Martin Luther went through. I had gone through many months of long fasting, prayers, etc., but all this did not give me any assurance of my sins being forgiven. I was afraid of hell and of purgatory, but the theological teaching of my church did not allow me any doubts. I had to accept her infallibility and authority and trust her as the only way of salvation. Being in touch with other needy souls, who came to me for a word of comfort, I felt inadequate to speak in the name of Christ.

Many times on the battlefield or after a bombardment, I forgot to raise my hand and pronounce the words, “I absolve you” to the dying soldiers or civilians to whom I was ministering. I used to remind them of the crucified Christ their Redeemer. Looking back, I see that maybe I was like the prophet Balaam who spoke, guided by the Spirit, not knowing what he said. In fact, all this behavior of mine was in conflict with my conscience, and I felt guilty of betraying the teaching I had received. I remember sharing this with another priest; he was disappointed because I was not exercising the authority of mediator, which the Church had given me.

After the war, I had experience under Communist Yugoslavia. I need not tell you the physical suffering I endured, but the terror of death was with me night after night. Every night some of my companions were taken to unknown destinations. I felt that if I were to be killed by the Communists I would have been a martyr of the Catholic Church, but this did not offer me any light or help in my uncertainty of having my sins forgiven. I used to pray, “Blessed Holy Mary, Mother of God, pray for me now in the hour of my death,” but the fear of the judgment of God, hell, and purgatory were constantly with me.

Some months later I fled to northern Italy where I spent three years working with poor people. I organized a group of one thousand homeless and jobless people. I had 200 children under my care, most of them illegitimate, for whom I provided food, clothing, and schooling. People were bitter against the pope, bishops, and the Church, but they loved me—not as a priest, but as a good, honest man. They trusted me and listened to me, whereas they had stoned the bishop of a nearby town when he tried to visit them. I remember once, I was speaking in an open air Mass, and among those present were more than 20 women of the red light district, a number of Communists, and many others living in sin. I read the account of the adulterous woman to whom Jesus said, “Go and sin no more.” They were touched, and so was I. I realized that only Christ could forgive their sins, not I as a priest. I invited them to do that, and they received Communion from my hands. But I knew that I was guilty against the teaching of my church. I could not sleep. However, the lives of my people were changing. Newspapers had carried daily reports of crimes committed by the people I cared for, but then they stopped. I remember at nighttime the young people were singing, “Let Christ Reign.”

In 1950, I was appointed chaplain on an ocean liner that took Italians all over the world. I traveled across to Asia, Africa, Indonesia, and Australia. I was still struggling in my soul, but I thought this struggle was the work of the devil. It was then that I came into contact with Protestants for the first time. I had been taught that branches cut off from Christ did not bear fruit and that Protestants were those branches. However, I could see many good fruits among Protestants. I will never forget one Christmas in the middle of the Indian Ocean. I could not organize a choir; so, five Protestant girls asked me if they could sing some carols. All the Catholics were so very much moved, and I more than they. The struggle in my spirit was stronger and stronger. My faith and trust in the Catholic Church was undermined. I had to renew my studies.

Truth and Life in Christ Alone

To understand my fears and doubts, you must remember that as a Catholic priest I had to have nothing to do with Protestants, and I was afraid I could be accused and sent into some desert monastery to rot. The tremendous storms I had experienced on the high seas of the Atlantic were nothing in comparison with the storms that had broken out in my soul. I did not believe any longer in the authority of the Church, but where could I find any security? The Word of God came to my rescue, offering me that spiritual source of power and courage to face the world, when through some simple words of Jesus, the Holy Spirit enlightened my soul and gave me that peace of sins forgiven and that joy which only God can give in believing that “…I am the way, the truth, and the life: no man cometh unto the Father, but by me” (John 14:6). My trust in Jesus for salvation gave me direction in my life. Only Christ could offer me truth, and only in Him could I have life, joy, peace, and purpose. I had to leave the officers and crew who loved me, but they were also disappointed at my decision. I had to flee from my superiors, relatives, and friends. Having been excommunicated by the Roman Church, I had no dignity and work, and every door was closed to me. But I praise God that the peace I had in my soul was so great that I overcame that stage in my life “without fear.”

I went to Canada where I worked for nine months as a general laborer in a hospital. It was hard work compared to the easy life on the ship, where I used to travel first class and had enjoyed every comfort. I had to come back to Italy since my visa was not extended. I lived for a time with my sister, who was a refugee, and I remember how my family often told me to go back into the Roman Church or I could not survive. It was then that I met two converted priests (and now evangelical pastors). They could well understand my position, and they helped me very much. I was given a job as a teacher in an orphanage, and then I was put in touch with Western Bible College in the States where I spent time in Bible studies. That was a time of growth in my spiritual life, as well as my academic life. The college put me in touch with some local churches, since I felt I had to come back to Italy for missionary service. The Lord has been very good in providing for me these last 25 years, during which time I have come back to the States only once.

Back in Italy, the Lord provided a faithful partner and fellow worker in the Gospel through all these years—my wife, Agnes. For family reasons, we were brought back into the place where I had served as a Catholic priest for some time, and the work was exceedingly difficult. The police were checking our moves. The Bishop spoke against us and tried to have us removed. People hated us. I remember having to wipe spit from the front door of our little meeting place and paint over the nasty writings on the walls.

With time, we were able to win the people’s confidence and trust. After 400 years (since the last Evangelical family had been forced to flee from the city because of persecution) the Lord gave us the joy of seeing a church started to His glory in the town of Rovigo. This is where I still live. I felt that I was the least able to be used by God in such an adverse city because of my past, but God in His mercy has found in me His instrument to use.

Our church has many young families, and we continue to grow in the Lord. When He put into our hearts the idea of extension, we had the indifference of the people to overcome. The Lord opened the way for us to start a local radio station, which has gone forward in spite of many difficulties. Our equipment was stolen, but the Lord has been good to us, and through it all He has led us into victory. Many letters show that the radio is listened to and enjoyed, and we are continuing all the time to try to improve our quality of service to our fellow men, those who dwell in the darkness in which we were at one time. As the name of the radio station suggests, we want to be a “Voice in the Desert,” like John the Baptist, and point men and women to the Lamb of God who alone can take away the sins of the world.