Thou Knowest That I love Thee – Juan T. Sanz 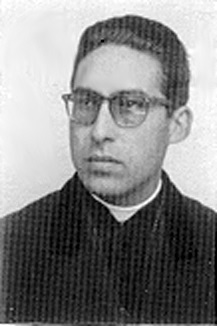 I was born April 28, 1930, in Somosiera (Madrid), Spain), the eighth child in a Roman Catholic family. I felt the call to the priesthood when I was thirteen, while listening to a sermon during the Mass (March 19, 1943). For economical reasons, I did not enter the minor seminary of the Diocese of Madrid until the academic year of 1945-1946.

During the first five years of my course, I studied Latin and Humanities. The following three years, I studied philosophy, theology, and ethics. In September 1953, I began studying theology and ethics as basic subjects.

Here I must stop to point out that no seminarian could possess or read a Bible during his first eight years. Concerning this matter, on the occasion of my twenty-first birthday, a woman, who would later be godmother at my first Mass, gave me a Bible which, to her surprise, she had to take home until I was twenty-four years old, when I started my theological studies. So, my interest in knowing more about the Bible would be more of a curiosity than a necessity.

I was ordained a priest on 14th July 1957, and on the 18th day of the same month I celebrated my “First Mass” in my hometown.

My first parish church was La Neriuela, Madrid. I took possession on 23rd August, 1947, and continued there until 1959, when, due to my parents’ health, I resigned and was assigned coadjutor to the parish church in the Neighborhood of Canillejas, Madrid.

I took my parents and my sister with me to this new post, where both the parish priest and the parishioners received us with open arms. But half a year had not gone by when my fellowship with the parish priest gradually began to deteriorate due to his fundamentalist and conservative attitude concerning the content of the preaching, the administration of the sacraments, the liturgy of the Mass, and the devotion to the Virgin Mary and the saints.

Why did I have to preach what the parish priest wanted and as he wanted; why did I have to hear the confession of the penitents before celebrating Mass, as if this were the expiation, however incongruent, of their sins? Why was the specific devotion to Mary and the saints allowed during the celebration of the Mass? Why use Latin in the Mass, and administration of the sacraments, if the parishioners could not understand it?

Going back to my ministry in my first parish, a year having gone by, I used Spanish in various parts of the Mass, in funerals and baptisms. This so pleased the vast majority of parishioners that their attendance and participation in worship gradually increased.

Reform in the Parish

What the parishioners did not like was the fact that I put some of the images in the storage room as some small repair work was being done in the church. This sudden removal of images and the use of Spanish in the liturgy were reforms for which I did not consult the Bishop. But some of these things were already receiving favorable comments. I now return to commenting on my priestly ministry as a coadjutor to the parish of Cauillejas (Madrid). There I realized that I should be careful in my actions and statements. But after two years, I spoke to my parish priest about my previous pastoral work. During the conversation, I wondered why I should not tell him about my past experience concerning the use of Spanish in a large part of the liturgy, about the place and use of the Bible in the preaching, and about the use and abuse of the devotion to images.

A few months later the parish priest informed me that, with the Bishop’s permission, we would be using Spanish during a lot of the liturgy and sacraments and that a lot of the images and altars would have to disappear as soon as the installation of radiators in the church began. And that is exactly what happened, much to the disgust of many “pious” women.

But the Sunday and quarterly preaching would have to remain unchanged, even though I thought that they moralized too much and consequently were not very biblical. The fact was that the themes and structures of the preaching were chosen and elaborated by a group of conservative priests with the aim that all clerical diocesan would preach on the same theme on the appropriate Sunday Masses.

Both this system and the content of the preaching clashed head on with my criterion, and this was, without doubt, the core of my interior battlefield against the ecclesiastical authority. It was an inner battle, as I could not oppose it openly, because one of those in charge of preparing the themes was my own parish priest and my reputation and my parents and sister’s welfare depended on his friendship.

Even so, I managed to “restyle” the proposed themes, giving them a new direction towards Christ. My parish priest came to hear about this and, to my great surprise, told me that, even though I was the officiant of the Mass, he would substitute for me in the pulpit whenever he could. And that he did on many occasions from that day onward.

In those difficult days of my priestly ministry, I used the Bible as my bedside book and searched more and more for its truthful, profound, and eternal message of salvation, for the rest of the world and me.

One day, the Lord answered all my questions when He led me to read and comprehend chapter 3 of the Gospel of John. For me, God’s love and promises would be the only rule, power, authority, and mirror in the future. But, had they not always been so for me? Of course they had! But now they were in another way, as God had regenerated me by His Word and Spirit: “For God so loved the world, that he gave his only-begotten Son, that whosoever believeth in him should not perish, but have everlasting life” (John 3:16). Therefore, God was my Father and His Son, Jesus Christ, was my only perfect, personal Savior. This was something completely new for me. A big change had taken place in my heart; I felt as an actor before men—as a blind man guiding another blind man.

In the summer of 1964, I asked the Lord to tell me what to do with my life, as I could no longer continue in the Roman Catholic Church because its hierarchy forced me to preach “another gospel,” different from the message of salvation by grace through faith, and found only in Christ.

But when, and how, could I leave my priestly ministry? Who would financially support my parents and my sister? The day I gave up my post for the sake of faith and conscience, would I find understanding and support in the Bishop? How would the Protestants, to whom I was thinking of going for advice, receive me?

The spring of 1965, I got to know about the “desertion” of a priest, also from Madrid, and a superior of the seminary, who, with the help of the pastor of an Evangelical Church, had left the Roman Catholic Church and had gone abroad to study Protestantism in a European, Protestant University. So, my colleague’s attitude and determination were the answer as to how I could leave the priesthood and know in a deeper way the Gospel of Liberty of God’s child.

With this aim, I contacted the German Church, La Iglesia de los Alemanes (Paseo de la Castellaua, 6 Madrid) and they gave me Pastor Luis Ruiz Poveda’s telephone number. As soon as I told him that I was a priest with problems of conscience and faith, he advised me to stop the conversation and to arrange to meet him on a certain day and place, as his telephone was frequently tapped by the police. And that is what we did.

Meanwhile, I felt as if my spiritual and psychological life were collapsing. Under the terms of Roman Catholic doctrine, I lived constantly in a state of “mortal sin,” 1) because I formally doubted my faith, 2) because I did not search for the pardon of this and other sins in the sacrament of penitence, 3) because I searched for biblical truth in Protestantism and not in my Bishop and theology professors, 4) because I rejected the Roman Catholic ecclesiastical hierarchy and authority, 5) because I rejected the doctrinal authority of my church concerning the Bible, 6) because it seemed to me that the aural confession of sins robbed God of the right and power which only He has in His person and the actions of His Son, Jesus Christ, and 7) because the celebration of the Mass seemed to me a supplanting of the merits of Christ on the cross.

Did all these reasons mean a full stop to my pastoral ministry? The Lord told me by His Word that it did not. But this forced me even to fight against Him, against my Roman Catholic mentality, and against my stubborn pride. This inner battle affected my health, and sleep, and produced many fears. It also required me to renounce everything for love of Christ, and for my own eternal salvation.

I Respond to the Lord’s Grace

At the end of the tunnel of anguishes and fears, the Lord Jesus invited me to respond to Him as the Apostle Peter had done for the third time near the lake. It was these words that I had already chosen as my motto for life, before being ordained as a priest: “…Lord, thou knowest all things; thou knowest that I love thee…” (John 21:17).

I am very pleased to give this testimony for this book, to show how the Lord has led me out of the shadows of Roman Catholicism into the light of the Gospel of Grace. “For by grace are ye saved through faith; and that not of yourselves: it is the gift of God: Not of works, lest any man should boast” (Ephesians 2:8-9).