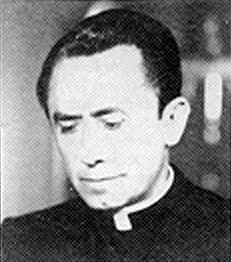 You and I have no doubt seen at one time or another a man dressed in a long black or white robe, walking along with his hands folded and with a serene expression on his face. Our first thought may have been that we were looking at a “ god, dressed like a man,” to use a common expression in some circles. Actually, it was a Roman Catholic priest, a figure shrouded in mystery.

I, Cipriano Valdes Jaimes, was one of these priests. Born in Michoacan, Mexico, to a devout Catholic family, I received my primary education under the watchful eye of those who taught me to observe frequent confession and daily communion. When I reached the age of twelve, I knocked at the doors of the Diocesan Seminary in Chilapa, in the State of Guerrero. For five long years, I studied the Latin of Cicero and Virgil. For three years, my mind was filled with the philosophy of the Greek writers. With great care, I was given four years of theology where I learned all the dogmas of Romanism. Finally, on October 18, 1951, on the Day of St. Luke the Evangelist, I was ordained a priest.

On that day, through the laying on of hands by the bishop, I was given the incredible, the deceitful, the false powers which the Roman Catholic Church pretends to give to man to delude others. I was granted the ability to forgive men’s sins, both inside and outside the horrible confessional box. On that day, I received the power to sacrifice Christ over again on an altar at my whim and fancy. I could now release souls from Purgatory, a place invented by Rome, through a lying and lucrative ritual. This is the undeniable teaching of the Roman Church that before going to Heaven men’s souls must pass through such a lake of fire. How far from the Truth! What error! Yet, that is what I believed as the result of four years of painstaking, incisive work in Dogmatic and Moral Theology. So, when I was told that I had power to forgive the sins of my fellow men, I accepted the fact with all my heart, not realizing that the forgiving of sins is a divine attribute. It cannot be delegated to a man. The Scripture says, “I, even I, am he that blotteth out thy transgressions for mine own sake, and will not remember thy sins” (Isaiah 43:25). “… who can forgive sins but God only?” (Mark 2:7). For twenty years in the Roman Catholic priesthood, I performed this ridiculous, shameful, anti-Scriptural practice of daily listening to the frailties of society, including military men, professionals, and politicians. I was the spiritual director in schools. For one year, I held the post of Assistant Parish Priest, and for nineteen years I was a parish priest. I had aides and assistant priests who helped me in the carrying out of my absurd duties.

Christ Sacrificed Once, for All

In order to repeat the bloodless sacrifice of Christ on the altar, I was given the power to convert the bread into His body and the wine into His blood through the magic words of the consecration. With joy, and deep respect, I accepted this authority. In my hands would be found the very Creator of the Universe, the Eternal God, made man for us. Is it possible that for twenty years I kept sacrificing Christ? And I did it up to four times on Sundays. What an awful, shameful travesty this was for me and for all who took part in what Rome calls the Mass. Man can never repeat Christ’s work on the Cross. To think he can is an invention of the Devil. The Bible says in Romans 6:9, “Knowing that Christ being raised from the dead dieth no more; death hath no more dominion over him.” How then can a priest cause Him to die a bloodless death? Hebrews 9:22 states that “… and without shedding of blood is no remission.” So what does a Mass accomplish? Does it purify and free souls from Purgatory? The Bible also states, “… and the blood of Jesus Christ his Son cleanseth us from all sin” (I John 1:7).

God is a Spirit

Catholic dogma declares that in every particle of the consecrated bread, and in the consecrated wine, the body and the blood of the divine Jesus Christ is fully present. What falsehood. Christ said, “For where two or three are gathered together in my name, there am I in the midst of them” (Matthew 18:20). But the sacrilegious lying and deceit reach their climax when the priest, after the so-called consecration, raises the bread and the cup while the people bow and strike their breasts or raise their eyes toward heaven, and exclaim, “My Lord and my God.” This is idolatry, worship of created matter. God is not a piece of bread. “God is a Spirit: and they that worship him must worship him in spirit and in truth” (John 4:24).

But I believed, taught, preached, and defended the doctrine of Rome whether it agreed or not with the Word of God. For me, at that time, the Church with its Councils and its traditions came before the Sacred Scriptures. The voice of the Pope had more authority than that of the Holy Spirit. Was not the Church of Rome the only one which men were bound to believe and obey? For that reason, I, as did Paul, actively persecuted the Church of God (Galatians 1:13). In their own places of worship, I defied Evangelical pastors, Protestants as they were called in official Roman Catholicism. I insulted them, humiliated them, and forced them out of the parishes where I was lord and master. I do not know how much of their literature I destroyed. I recall a particularly shameful incident. I, along with some devout (?) men, came upon a young Christian woman surrounded by a group listening intently as she presented God’s Word to them. I forced myself into the midst of the crowd and began to ridicule and humiliate her and the work she was doing as a servant of God. I threatened the crowd around her by telling them that they would die without the sacraments of the Holy Mother Church. I ordered those with me to gather up all the Bibles that had been given out, because they were false. They did not have the stamp of approval of the true Church, the NIHIL OBSTAT, or the IMPRIMATUR. They collected sixty-six Bibles, freshly delivered from the press, and with my own hands I tore them up and fed them to the flames. Yet, I did it all in ignorance. My Savior says, “He that rejecteth me, and receiveth not my words, hath one that judgeth him: the word that I have spoken, the same shall judge him in the last day.” (John 12:48)

“But when it pleased God, who separated me from my mother’s womb, and called me by his grace” (Galatians 1:15). I heard within me His voice saying, “Cipriano, this is not where you belong. Leave all of this.” I simply obeyed and I left. The bishop summoned me and I returned to my parish, offering some of the well-worn excuses. However, the Lord’s voice kept insisting. While I listened to confessions He said, “Don’t listen to the weaknesses of others. You can’t forgive them anyway.” When I celebrated Mass or baptized babies, His voice interrupted me. I left my position a second time, and the bishop called me back again. And still God’s irresistible voice would not leave me alone. At last I could no longer stand it. I went to the bishop’s office and announced to him that I was going to leave the church. He replied, “What are you saying? You are leaving the church? If you are not happy with this parish I will get you a better one.” My answer was, “No, what I am trying to tell you is that I want nothing more to do with the Church.” The bishop reacted with, “What are you going to do? Where will you go?” And I simply replied, “I don’t know what I’ll do, nor where I’ll go. All I know is that I have to leave.” Irritated, the bishop stood up and brought me some forms to fill out requesting my release from Rome. His disgust was not so much with me personally as it was that he was losing a man with eighteen years of study and twenty years of experience. I was not expelled from the priesthood in the Roman Church; I left because THE LORD CALLED ME.

One month later, I was in the City of Tijuana, Baja California, Mexico. There the Lord had a missionary, under the guidance of the Holy Spirit, prepared to show me Christ as the only Savior. Finally, I was able to understand the Scripture that says, “For God so loved the world, that he gave his only begotten Son, that whosoever believeth in him should not perish, but have everlasting life” (John 3:16). I have trusted in Christ; I have received Him as my Savior and as the Lord of my life. And because of this I know that I have eternal life. A man does not enter heaven because of his works, his sacrifices, or his virtues great as these may be. The only way to the Father is through the unlimited merits of Christ. No ceremony, no ritual, no sacrament can save a man.

Dear reader, I ask that the Spirit of God give you light, wisdom, and understanding. After reading my testimony, may you realize that the only reason I have given it is that you may know that God can change the mind, the heart, and the life of any man, no matter what his moral or spiritual condition. He changed me; He can change you. I have not proclaimed these truths to offend you or anyone else. There now is love in my heart, and my life, because I am a born-again Christian. Recognize the fact that you are a sinner and confess your sins directly to God just as I did one day. Ask His forgiveness for your sins. Invite Christ into your heart and life, and He will give you

I now preach the Gospel in churches, prisons, public places, and private homes.