I Found Everything When I Found Christ – Anthony Pezzotta 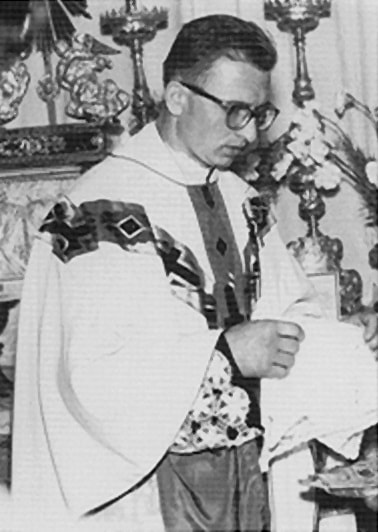 While studying theology in England, I began to have serious doubts concerning certain doctrines of my Church, which I found difficult to reconcile with Scripture. These doubts continued to trouble me even after my ordination, but I endeavored to smother them by plunging into my studies and teaching assignments. My schedule was so heavy that there was little time for research or prayer.

After ten years of such hard work, I had to return to my home in Italy for a year of rest and recuperation. Now, however, my doubts revived and increased in number, as did my determination to find satisfactory solutions to the doctrines troubling my spirit. I read incessantly and pondered deeply the words of our great theologians, but all my doubts persisted.

From Books to The Book

Upon returning to the Philippines, I remember laying aside all my books of theology, determined to focus all my attention on a single Book, the Word of God, particularly the New Testament. The Bible, for all practical purposes, became my only source of wisdom for preaching, teaching, meditation, and reading. In a relatively short time, my doubts began to disappear, as one after another they were solved by my study of the Scriptures.

At the end of January 1974, I was in Santa Cruz, south of Manila, where an attractive Conservative Baptist Church had just been built. I had never been in a Protestant church, so one day I walked quietly into the sanctuary to look around. Almost immediately I was greeted by a friendly Christian believer who insisted upon introducing me to the pastor, Ernesto Montalegre, a most wonderful man of God.

We talked together for a couple of hours, I doing all I could to make him a good Catholic, and was quietly answering all my questions. Of course, I did not succeed in converting him to Catholicism, but neither did he convert me to Protestantism. Nevertheless, many of his answers struck me with great force, so that at the end of two hours I left with multiplied doubts in my heart. From that day on, a period of Calvary started for me, a time of sleepless nights, agonizing indecision and a frightening lack of courage to profess the truth of Scripture. Gradually I began to see what the Truth was, but I did not know what I was to do…until the night of February 20, 1974.

The Night of God’s Grace

That night I was alone in my room and for the first time in my life I really prayed. I told Christ to take over because I did not know what to do. I felt I was the chief of sinners. “But what kind of sinner?” you might ask. Well, to be perfectly honest, I never smoked, drank strong liquor, or broke my vows of celibacy throughout all the years I was active in the priesthood. I left no bad record behind me, but was rather proud of my achievements as a parish priest. In fact, my sin was my pride. My pride tried to stop Christ from coming into my life because of what my bishop might think or say. I kept asking myself: “If you take Christ as your Savior, what will your superiors say? What will your colleagues think, or your students? They esteem you; how can you betray them?” I lacked the courage to be honest with these people; the esteem of men meant more to me than love for the Truth. But then, as I was praying, my eyes fell upon this text in John’s Gospel: “Nevertheless among the chief rulers also many believed on him; but because of the Pharisees they did not confess him, lest they should be put out of the synagogue” (John 12:42).

Those last words penetrated my heart like a sharp two-edged sword, but they also filled me with strength and courage. I was set free. That night I slept without the pain and agonizing indecision of the prior terrible weeks. The following morning as I awoke, the picture of that kindly Baptist pastor came to my mind. I dressed hastily and drove to his church where we talked together for some time. I gladly accepted some tracts and pamphlets. Then turning rather quickly as we were parting, I asked: “In case I leave my Church, can I come to stay with you? Will you accept me?” Smiling, he said, “We have a room here and the believers will take care of you.”

It took five days of prayer and more reading before I yielded to God’s grace. Then, on February 26, I received Christ as my personal Savior and Lord. I asked Him to take over the direction of my life, as I was leaving everything behind me: my car, my library, all my possessions. I wrote my letter of resignation to the bishop and went to live with my newfound, spiritual friends in Santa Cruz.

On March 3 at 11:00 a.m., I publicly confessed my evangelical faith and was baptized in the Santa Cruz River, which flows behind the church. The important thing is that from the day I accepted Christ to this very moment I have not had one single second of remorse, nostalgia, or homesickness for my previous life. I was literally filled with joy and knew a freedom from doubt beyond all description. I remember one priest who visited me a few days later asking: “Tony, how did you dare in just five days to make such a decision? You have left the Catholic Church, twenty centuries of culture, popes, saints, all that you have learned and loved for so very long?” I gave him the answer, which came from my heart, “I don’t think I really left anything; rather, I found everything when I found Christ.”

No Longer A Catholic 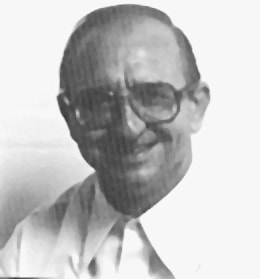 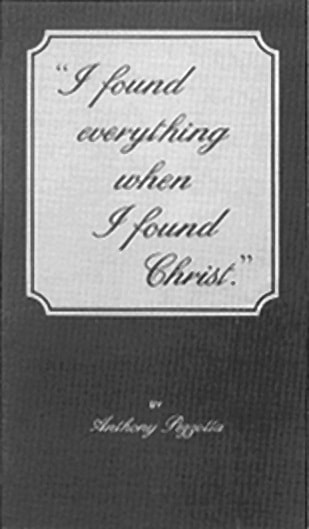 If you believe that you are saved because of your faith in Christ, and accept His Word as final authority, you are not a Roman Catholic but a Protestant, even if you do not like the word Protestant. Salvation by faith and the sole authority of Scripture are the very foundation of Biblical faith, as against salvation by works and sacraments and the authority of Catholic tradition.

In conclusion I would like to share with you how many Catholics simply have a sentimental attachment to their church, which they were trained to call “Holy Mother Church.” This common expression reflects their belief that they believe they owe their spiritual life to the Church, for it made them Christians through baptism, and keeps them spiritually alive through the other sacraments. Biblically, it is not the Church that makes us, but believers who make up the Church. It is by grace through faith that we become lively stones of His Church; Christ is the true builder. On the authority of the Bible alone, one must believe only on Him!