I first heard the Gospel in 1968 when I worked at the King George the 5th Docks in Glasgow as a stevedore. One day, a young man by the name Tommy Lavery came to work in my gang, Tommy, being a blood-washed, born-again believer in Jesus Christ, lost no time proclaiming Jesus Christ as the Saviour. The Jesus that Tommy spoke of captivated me; no one had ever told me that he could save me from my sin, in fact, the term “saved” was not even in my vocabulary. The Jesus that he preached was not the Jesus that I was familiar with. The Jesus that I new was a rather sad character whose one-dimensional picture appeared in storybooks. Sad to say, two years were to pass, before—by the Grace of God—I would surrender my life at the feet of Jesus and cry out for mercy and grace. My year of jubilee came on February 1970, at the age of 29, when Jesus delivered me from my bondage and set me free. 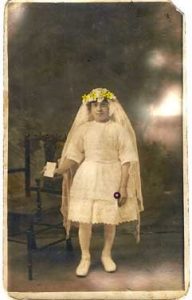 I was born into a Roman Catholic family and a superstitious one at that. On my father’s side, I had a staunch Roman Catholic grandmother, and my grandfather was a Scottish protestant and a member of the Orange Lodge. Theirs was a strange union, but strangely enough, they apparently were in love. Grandmother obviously was the dominant one, because my father and his brother attended a Catholic school. I can well remember my little Irish grandmother dressed in her Queen Victoria garb smoking her broken clay pipe. It would hang on the side of her mouth pressed against her jaw; hence, it got the name, “ Jaw Warmer.”

My grandmother’s house was a poor house, if indeed it could be called a house. Every room was a shrine to some saint or angel. There were wooden floorboards, life-size statues; but then again they would have appeared life size to a small child like me. There were barrels of holy water in all the rooms, while vases with flowers adorned the same. Sketches and photos of popes, right up to Pope Pius the 12th, lined the walls throughout the house. My grandmother influenced me more than did my grandfather. I knew nothing of his religion.

My Lithuanian grandmother, unlike my Irish one, would send her children to the Famous Glasgow Tent Hall where my mother and her sister would hear the Gospel at the Sunday school meeting. The poor children of Glasgow were fed body and soul at these meetings and at the end of the meetings; they would take home a big jug of soup and bread rolls for their parents. When the parish priest objected to my mother attending the Tent Hall, my grandmother replied, “If they are good enough to feed our bodies, then they are good enough to feed our souls.” She then chased the priest from her home. My mother didn’t know it then, but the seed of truth had been planted in her heart, and in 1976, I would have the privilege of watering that seed that had lain there dormant since 1924. I would see it blossom into full salvation. My mother, Ellen Lennox, born in 1914, went home to Glory in 1976.

One sows and another reaps

The policy of Rome in the 1940’s was to keep ordinary Roman Catholics in ignorance, and this was done by not allowing them to make an independent study of the Bible for themselves. As a child, I was not encouraged, or allowed to read a Bible or even own one. I remember, as a child, I asked the priest, “Father, why am I not allowed to read the Bible for myself?” His reply was confusing, especially to my little child like mind. “It’s a blue book son, there’s far too much begetting in it,” he said. Even at that tender age, I knew what the term blue book meant. I did not realize it then, but as a little boy I was spiritually blind, being led by spiritually blind leaders whose minds had been darkened by the prince of this world. The Bible says, “Let them alone: they be blind leaders of the blind. And if the blind lead the blind they shall both fall into the ditch.”1 Nevertheless, unknown to me at the time, God was working in my life, because I was allowed to read a little book based on the Bible which was called, “The Bible History”, and it was in this book that I was to read the story of Adam and Eve. Little did I realize at the time, but I was to discover something called the origin of sin. Adam and Eve had sinned, and because they had sinned, we were all sinners and all on our way to Hell. But no one bothered to tell me that there was a way of escape, and because I was not told, I was to live in fear of Hell right up until 1968, when the Gospel was proclaimed in my ears. Truly it was the power of God as Bible says; “the gospel of Christ is the power of God unto salvation to every one that believeth.” 2 That power I experienced as I was, “justified freely by his grace through the redemption that is in Christ Jesus.” 3 Faith was to know the joy of sins forgiven. “So then faith cometh my hearing, and hearing by the word of God.” 4 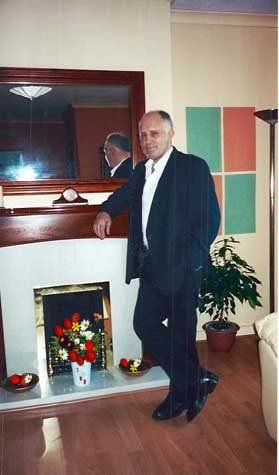 When God saved me, I did not come out of Rome. God took Rome out of me. God is in the business of taking religion out of those whom He saves. He takes Islam out of the Moslem, Judaism out of the Jew, such as Buddhism. Why? It is because religion is the enemy of God; it was religion that cried out against Jesus as he stood before Pilate. Even to this day, its echo can still be heard. “But they cried out, Away with him, away with him, crucify him. Pilate saith unto them, Shall I crucify your King? The chief priests answered, We have no king but Caesar.”5

My conversion influenced others. To what extent, I shall never fully know until I get to Glory Land. Certainly, my mother, just before she died, repented of her sin and owned the Lord Jesus as her Saviour. My mother had a fear of the priest; it was something that was common to that generation, including mine. Well, the night that she came to the Lord, it would be around midnight in a dark hospital ward, I told her, “Mother, from this day forth, your sins are between you and God, you no longer need an earthly priest to confess to. Jesus is now the mediator between you and God. “Do you understand that, Mother?” She looked at me and nodded yes. The next day the priest came up to take her confession and she addressed him, not as father, but as son. “Look son,” she said, “my sins are between me and God, no one else; but if you would like to sit and talk, so be it.” She told me later that the priest got angry and stormed out of the hospital ward. After her conversion, she was to go on to serve God as a Sunday school superintendent until her death in 1987 she was forty-six years old. Even in my darkest hour, God never left me. My late wife, May, was a bible believing Christian. I am now sixty-four years old and have never lacked anything that was needful for this life.

God blessed me with a second wife, Kat, a beautiful Christian lady. I have a wonderful stepson and a beautiful sixteen-year-old daughter who is also saved. I have three children by my first wife: two girls and a boy who are still to come to faith in Jesus Christ. But I live in hope that God will give salvation to my household.

Religion failed me miserably. It failed me because religion has the hand of man in it; therefore, religion has to be flawed. Why? Because man is a sinful creature, born and shaped in iniquity. As the Bible says, “behold, I was shapen in iniquity; and in sin did my mother conceive me.”8

Papal Rome has changed since I was a boy, but the changes have only been cosmetic. A snake may shed its skin, but it remains a snake and “deadly,” and this is something that we must never lose sight of. My testimony is truly called, “Snake Poisoned, then more than Revived.”

I thank God, and our Lord Jesus Christ, for my deliverance from sin and Papal Rome. I thank God for taking me out of the hands of blind leaders. If you reject Jesus Christ what are the alternatives for everlasting life? “Then Simon Peter answered him, Lord to whom shall we go? Thou hast the words of eternal life.”9