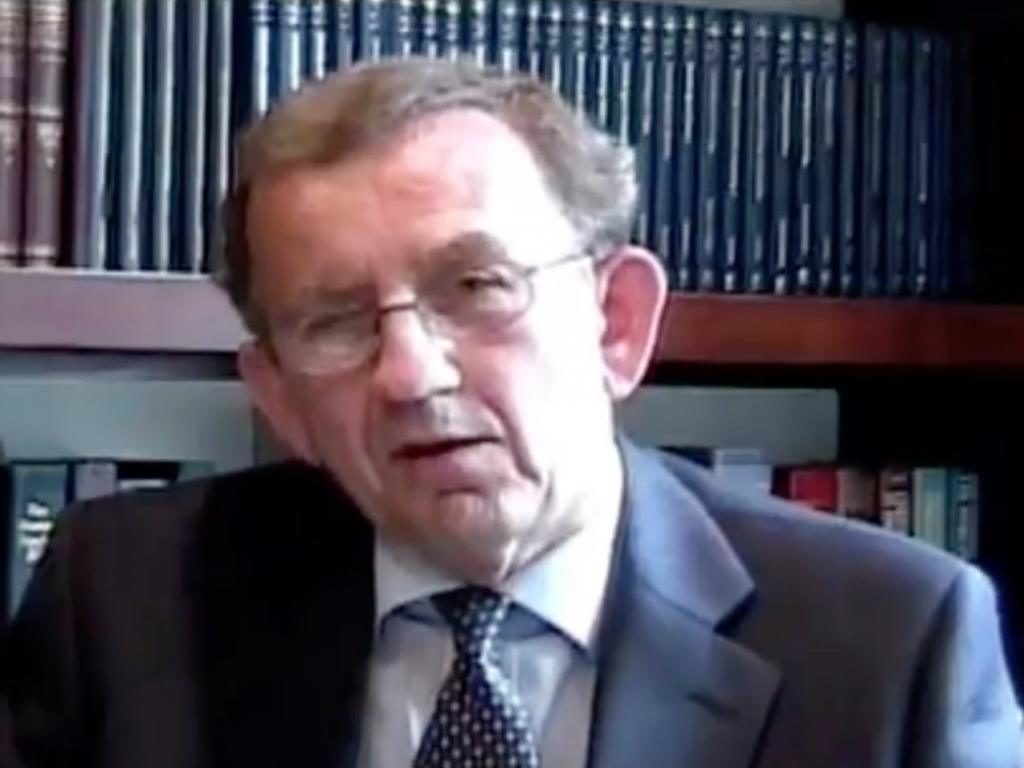 After a period of illness our beloved Brother,  Michael de Semlyen was taken home to be with the Lord on February 5th, 2019.

Michael was a clear and vocal Protestant of the most gentle yet immovable character who wrote “All Roads Lead to Rome” (1993) and “The Foundations Under Attack – the roots of apostasy” (2006). He established Spirit of ‘88 and Dorchester House Publications in 1987, remembering the great anniversaries of God’s delivering Britain from Papal tyranny. The aim was, “To remind both church and nation of the importance of our Christian heritage and the everlasting Gospel of The Lord Jesus Christ. Michel was a trumpet sounding the importance of our true Christian history and the warned of the storm clouds of the emerging ecumenical movement.

Mr. de Semlyen would want to be remembered for what he believed rather than anything he achieved. Micheal is often quoted as saying,

“Are We Abandoning Our Christian Heritage?”

An increasingly common feature of these future-orientated times in which we live is a remarkable lack of knowledge of history, especially among younger people. Very few Christians have more than a scant knowledge of Church history or of the precious legacy of our Christian heritage handed down to us by our forefathers. The Charismatic movement is convinced, in step with the New Age movement, that the Lord is “doing a new thing.” Renewal, it is thought, has rescued us from our past, from the unpleasantness, the strife and the bloodletting. The old conflicts over doctrine and error are no longer relevant nor is the recollection of them acceptable. The mere use of the word heresy, a word that is so central in all of Church History, has been deemed divisive, as well as intolerant and unloving, and has nearly been eliminated from the modern versions of the Bible. Today, the term heresy could hardly be more “politically incorrect.”

Central in all of this are the neglect of history by both church and nation and the costly consequences of such disregard. History is the repository of experience and knowledge, of lessons learnt and unlearnt. It can be seen as the outworking of the Holy Spirit in the life of the invisible church, the elect of the Lord Jesus Christ. Few believers today know that historic evangelicalism has long shared a common heritage in the “solas” of the sixteenth-century Protestant Reformation. The Reformation “solas” affirmed: Scripture alone (Sola Scriptura), Christ alone (Solus Christus), Grace alone (Sola Gratia), Faith alone (Sola Fide), and to God be the Glory alone (Soli Deo Gloria). In short, the “solas” were the rallying cry of the reformers.

Michael de Semlyen and Richard Bennett coproduced a very popular video program titled “The Catholic Inquisition” . The program gives a historical account of the  torture and murder that took place under Papal authority during the 605 years of the Inquisition. It truly sets the stage for future generations who do not take heed to warning of scripture and the Antichrist in our midst.

Other great articles written by Michael include:
The Alignment of New Evangelicals with Apostasy
Papal Rome on the European Union
The Roots of Apostasy

True ecumenical unity is clearly defined in the Scriptures. In the words of the Apostle Paul, “There is one body, and one Spirit, even as ye are called in one hope of your calling; One Lord, one faith, one baptism, One God and Father of all, who is above all, and through all, and in you all.” (Ephesians 4: 4-6) Thus followers of Christ who place their faith solely in the one triune God and His written Word, as did the Lord and the Apostles after Him (Sola Scriptura), are one in body, in Spirit, and in truth. They are saved before the all-Holy God by grace alone (Sola Gratia), through faith alone (Sola Fide), and in Christ alone (Solo Christo), and all glory and praise is to God alone (Soli Deo Gloria). Through the centuries, these five biblical principles or “solas” have helped the persecuted church hold fast to the simplicity of the Gospel. True ecumenism is fellowship or working together in adherence to these “solas” which maintain the foundation of true unity in the Lord. To the degree to which these key basic biblical standards are embraced, true unity will be evident.

On the other hand, false ecumenism, typically institutionalized, joins together professing Christian groups in common causes and activities, with one or more of the parties involved unconverted. While purporting to confess the Lord Jesus Christ according to the Scriptures, for the most part the five biblical principles, the “solas” that display the basis of true unity in the Lord are compromised. The extent to which these principles are not upheld usually indicates the degree of submission of the particular church or organization to Rome.

There has been departure from the certainties of our only truly Protestant and Authorized Bible, now replaced by a plethora of corrupted modern versions, and further undermined by the repudiation of the doctrines of grace by a man-centred gospel. The rejection through the centuries of the old orthodoxy by influential Arminians such as Archbishop Laud, John Wesley, and Charles Finney paved the way for the successes of the Counter-Reformation and the “ecumenical” acceptance of the old spiritual enemy, the Church of Rome. Through it all we no longer know quite who we are and what we stand for. Our established Church is losing its identity, as is our nation. Together with our sovereignty and independence, we are abandoning our hard-won freedoms; and few people know or seem to care.

The King James Version of the Bible was conceived at the Reformation and given birth soon after in 1611. The Revised Version of the Bible of 1881, which has spawned the many modern versions, was the product of an era during which Darwinism, Liberalism, Higher Criticism, and the Romanizing Oxford Movement were in fashion among opinion formers in the Church. That revised Bible has proven to be a historic break-through for the Counter-Reformation. Largely lost in its rendering is the prophetic and historical identification of Papal Rome as the Antichrist. The differing renditions of the Scriptures, based on manuscripts that were rejected by the Reformation, obscure and conceal the true meaning of the prophetic passages; instead exonerating Rome and substituting a Futurist identification of Antichrist. The importance of Church history therefore is difficult to overestimate.

Faced with such widespread ignorance in today’s church, we have set out in this ministry to demonstrate just how important the knowledge of history is. For if we ignore the lessons of History we are destined to repeat its mistakes.

Michael de Semylen was a faithful Christian soldier, who has completed his mission here on earth. He will be greatly missed and his firm Protestant stance of brining to remembrance those who have gone before us and his warning to to those who stand in front of us will be one of his lasting legacies.